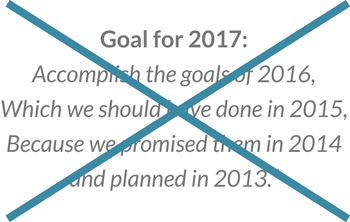 Field report for executives who want to make a real difference.

Breakthrough objectives are the means of choice in order to clearly improve the company’s situation over the financial year.
An example: The COO of a Hidden Champion of the automotive supply industry laments the considerable pressure exerted by its investors at him. The EBIT does not fit any more, somewhere he has to raise potential – he needs to do it fast and consistently.
All global heads of the Legal Entities will be invited to the German holding – representatives are not allowed.  With the invitation, a strategy paper (a DIN A3 page) is sent out in which the urgency of the situation is made very clear by the COO. In a videoconference, he describes his observation of the operative business, his conclusions, the purpose of the upcoming meeting and, last but not least, the breakthrough target for the coming financial year.

Reduction of scarp rate worldwide by 20%.

… within one year; in an industry that deals with sensitive material. And here it comes:

The result is to be reached after eight months.

The remaining months will serve to strengthen the performance.

All other objectives on the scorecard should keep their status. Only the given quality goal should be focussed:

This impulse has persuaded all the heads of the countries to travel and to attend the meeting. Some think:

“It must be a bad sign when such a high goal is announced.”, or: “If I can’t accomplish this goal, it will be bad news for my bonus.”

In a two-day workshop, the executives were invited to derive own sub-strategies from the overall breakthrough target. They arrive at more than two dozen approaches, which are to be implemented in an appropriate manner in the different factories.

Lean initiatives are experiencing a renaissance

This global executive team is currently rolling out Lean Manufacturing projects. These have so far been considered more or less as a self-purpose, with little success expectation and thus also low paid attention. Now it is different. The Lean quality tools now are seen as strategic drivers – Lean (an agile methodology in the end) is now linked to the company’s core strategy and contributes to its success.

In addition, a review process is agreed, the heart of the new form of strategy implementation.  Monthly, not mid-year, the COO personally goes through the progress together with each executive. Mind Set:

The pit stop after eight months shows an amazing result.
One out of seven legal entities has outperformed the target by seven percent.

All other Legal Entities are still far away from this target. It is a realistic picture in a strategic project like this.
How to deal with this?  All the other executives will be invited to the most successful site to learn first-hand from their leader on how he managed to get these results.

In the coming months, this benchmarking and practical training will lead to another factory reaching the target line in the same fiscal year. Four legal entities are improving, one falls back.

What is the profit of the project?

Was it a mistake to create such a tough breakthrough target?
I don’t think so. The entire process has reached its goal to an amount of almost 75% in twelve months. Would it also have been achieved with a standard approach? Would a learning process have taken place, a cultural change – here described between the lines? Not likely.

The most important result to me – apart from the improvement of the EBIT – was that this Hidden Champion decided to do exactly the same in the following year.

Their next leap is to reduce inventories by 27%.

The quality goal from the past year has to be maintained despite all of this and still needs to be achieved by some plants.

The breakthrough target process is still applied today, after five years, although major parts of the management have changed, as it is so often the case.